I’ve often walked past Unit 51 and thought it looked cool, then kept walking because I don’t have a beard. A lot of my creative pals are familiar with this under developed area of the city, Unit 51 being part of the Baltic Creative Campus. My other pals think it’s a bit scary, but if you wander just a couple of minutes out of the city centre away from that tacky rainbow Christmas tree you’ll find this bright, airy unit. Graffiti by independent artists is on sale across the walls (good stuff, not the kind in the Tate you have to really think really hard about). This is more somewhere for a working lunch than dinner, full of people who look like they’re mentally inventing a new colour.

Now, to the food. I literally cannot think of a dreamier combination of ingredients than bacon, fig and Stilton, all bundled into a ciabatta roll. Toppings were generous, and the bacon was well done so for practically the first time ever I didn’t have to waste time trimming off the squelchy fat bits. If you follow my blog you’ll already know how much I love my blue cheese and I wasn’t disappointed with how much they packed in. The salad was a bit snazzy as well so I got to add ‘try a radish’ to my bucket list then tick it off (#culturepool). My only qualm would be that the ciabatta could have been a little fresher, but I’m not a food writer so probably wrong anyway. The meal was advertised as a bagel but I fancied ciabatta and swapped, though in hindsight it probably would have been even tastier.

At little under £6, it’s not on the cheaper side, but I would definitely go again. Alex went for the grilled halloumi, roasted red pepper and chorizo ciabatta, which was ‘v v good’.

We’d been eyeing up the sweets before even ordering, so I had a coconut Bakewell slice in the name of reviewing whilst Alex went for the sticky ginger cake, which was ‘really yummy’. It’s worth noting she is allergic to gluten and hasn’t died yet so extra points to Unit 51. The girl who baked the cakes had some boss eyeliner going on as well. 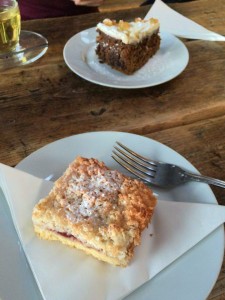 The place caters particularly well to rabbits and vegans/hipsters, with specials including:

Basically, there’s so much more to Liverpool than Jamie’s Italian and Maccies. Be brave – you might feel like a car’s gonna zoom down that quiet road and kidnap you but stop being so self absorbed oh God I’m scared – and you’ll find amazing  venues like Constellations, 24 Kitchen St, the Camp & Furnace and places I’ve still not tried yet, but will be telling you about as soon as I have the excuse to go (i.e. when I’m hungry again tomorrow). 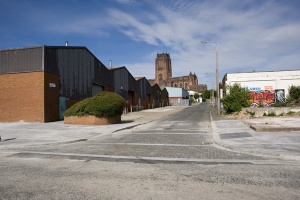